Awww Yes… Players have reported to spring training and baseball season is about to begin. With Griffey Jr. returning to the Mariners, I thought it would be fitting to have this Bootleg Classic dedicated to one of Griffey’s greatest guest starring roles ever. Even though baseball is tainted at the moment, and because of the “steroid era” we’ll probably never feel the same about baseball ever again, this Bootleg Classic takes you back to a time when baseball seemed as genuine as Griffey’s smile on his Upper Deck rookie card. 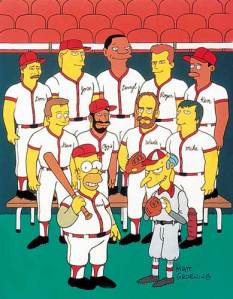 Do I really need to do a background on The Simpsons? It is one of the most influential animated programs in the history of cartoons. So influential that folks have written books on the Simpsons’ effect on society. So I am going to assume everyone knows about the misadventures of Homer, Marge, Bart, Lisa and Maggie Simpson, as well as the other loveable townfolk of Springfield.

Over its 20+ year run, The Simpsons have had countless guest stars. But “Homer at the Bat” was the first memorable episode with guest stars. Not only were they guests, they were professional athletes, Major League Baseball stars, and they had 9 of them to boot, and at the time they were all very well known!  In my humble opinion, the way they utilized the Major Leaguers was perfect. They were able to juggle the 9 superstars and not short change the Simpson family. In fact, the storyline is very much enhanced by having real life MLB baseball players, while at the same time having memorable hilarious moments from Homer. Check out this clip from the “Homer at the Bat,” and judge for yourself:
Vodpod videos no longer available.

Steve Sax: Arrested by the police for an unsolved New York murder.
Mike Scioscia: Radiation sickness.
Ken Griffey Jr.: Overdose of Nerve Tonic that leads to gigantism.
Ozzie Smith: Vanished off the face of the earth thanks to Springfield’s Mystery Spot.
Wade Boggs: Knocked out by Barney because of a disagreement of who is the greatest Prime Minister.
Jose Canseco: Helping the lady in the house.
Roger Clemens: Hypnotized to be a chicken.
Don Mattingly: Kicked off the team when he didn’t shave his sideburns (what sideburns?).

The best of the guest stars was, believe or not, Darryl Strawberry! Yes he was the one left who played in the game, but with Bart and Lisa’s taunting, Darryl’s tear and the absurd moment when Mr. Burns pulls him for Homer in the bottom of the ninth bases loaded for the win was just precious.

Which brings me to my final reason why this is classic…The Ending, which had me rolling. You would think Homer comes up to bat and drives in the last run and everyone’s happy. NOPE! He gets beaned in the head, knocked unconscious, but because of that he walks home the winning run. Brilliant!

It’s a shame now. With all the steroids talk, its hard to feel the same about baseball. There are even 3 guest stars in this episode that I shake my head in disappointment everytime I see it (Roger Clemens, Jose Canseco, Darryl Strawberry). But still, this episode takes me back… When Junior was in Seattle and baseball still seemed pure. Wait…Griffey’s back in Seattle now… maybe there’s hope… 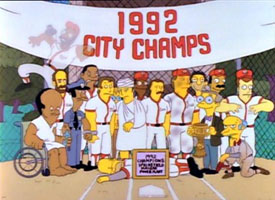