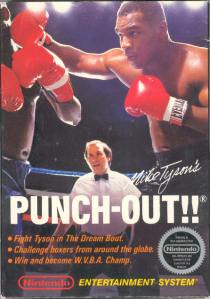 At the moment there are 2 stellar video games that feature the sweet science of pugilism or boxing. Fight Night Round 4 is one of those games and the other is the revival of the classic Nintendo series Punch-Out!! on Nintendo Wii.  I think I have already demonstrated once before how animation and boxing are related, and these new video games bring out both the great physics (Fight Night Round 4) and the great enterntainment (Punch-Out!!) of the sport of boxing.

Even though one is more geared toward simulation and real-life and the other toward exagerration and cartoon, they both have a common thread in terms history. They both harken back to this Set the VCR moment, from arguable the greatest boxing video game of all-time!

Hit the jump to read more about this Set The VCR moment:

Punch-Out!! started out as an arcade game, there were actually 2 produced, Punch-Out!! and Super Punch-Out!! In both games, you played as an unnamed fighter and you fought your way up the ranks until you fought the champ and won the belt. When it was decided that Punch-Out!! would be ported to the NES, because of limitations, instead of a wireframe model, your unnamed boxer was shrunk in order to see your opponent and was given the name “Little Mac” because of his new small stature. For the North American release it was decided that Mike Tyson’s name and likeness would be used after then president of Nintendo Minoru Arakawa attended a boxing match featuring Mike Tyson. Thus Mike Tyson’s Punch-Out!! was born. 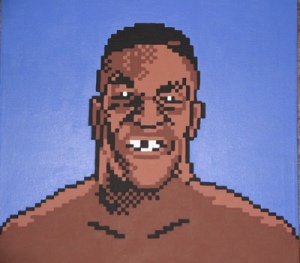 Little Mac, 17 years old, fighting out of the Bronx with his trainer Doc Louis, fights his way up the Minor, Major and World Circuits of the World Video Boxing Association (WVBA). The premise is simple, figure out your opponents pattern and exploit them for the win. Along the way he fights a colorful cast (read: RACIST) of characters that include, Glass Joe, Piston Honda, King Hippo, Bald Bull, and many others. The game is fun, easy to play, and challenging, all this makes it a good boxing game. However after winning the Minor, Major, and World Titles, this Set The VCR moment is what makes it arguably the greatest boxing game of all-time.

This is what made the game. I remember the first time I fought Mike Tyson. It was that nervous yet excited feeling that is so hard to explain. This was the moment you wanted, this is what you put in all those hours for  and, just like many others, the first punch that Tyson threw knocked me to the ground. In fact, Tyson was HARD! SUPER HARD!! Almost to the point where I thought the computer was cheating. The video up above doesn’t reflect this, but I don’t think anyone beats Tyson the first time you play against him.  There was a real sense of accomplishment when you got to Tyson, it was even more rewarding when you ACTUALLY beat him! 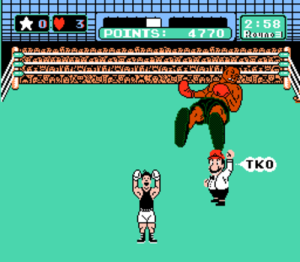 I jumped up and down, paraded around the house, and celebrated like it was my birthday or Christmas when I first beat Tyson. All the while my Mom, Grandma and sister looked at me like I was crazy. I didn’t care though, beating Tyson was an accomplishment, which is a problem for the newer boxing games.

Hence, in this blogger’s opinion, Mike Tyson’s Punch-Out!! (by TKO) is still the greatest boxing game of all-time! Set The VCR!