Tomorrow, or today, err soon ,(April 5 in Japan) a brand new Fullmetal Alchemist series will be launching in Japan. From what I read, it will NOT be a continuation of the series, but a re-boot of the series in order to be more faithful to the manga.

Will it be as successful as the first anime series? We’ll see, but first I wanted to go over one of the many Set the VCR moments from the first Fullmetal Alchemist anime series. 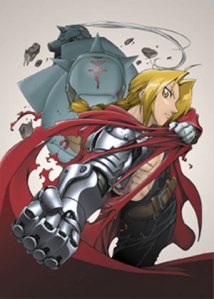 Many of us can think of an event, an occurrence, a decision, or maybe a series of these in our past that drastically changed our lives. A change so dramatic, that we can safely think: “after that, there was no turning back.”  Do you remember any those times? Do you remember the feeling you had when you realized that everything had changed?  Were you confident and sure of your new paradigm? Or were you hesitant, worried, and a bit scared of what would happen next? Remember those feelings and emotions now?

Expressing these feelings and emotions through art is a daunting task for any form of art or media. Get it wrong and your audience will lose interest with the quickness. Get it right, and the skies the limit.

This is where this next Set the VCR moment comes in: (Hit the jump)

Fullmetal Alchemist is styled after the European industrial Revolution. Set in a world in which alchemy is real and is one of the most advanced scientific techniques known to man. The story follows two brothers, Edward and Alphonse Elric (Ed and Al). After a disastrous alchemy attempt to bring their mother back to life, Ed loses his left leg and right arm, and Al’s soul is attached to a suit of armor. This is the story of how they attempt to restore their bodies.

Episode 3 “Mother” is a flashback episode. Ed and Al learn alchemy from a very young age, taking after their father a state alchemist in the military, who apparently abandoned his family when Al was still too young to remember him. They show their alchemy to both their friend, Winry Rockell, and their mother, Trisha Elric. Trisha encourages them in the pursuits of Alchemic knowledge, but she dies from a sudden illness and the brothers vow to revive her with alchemy. They apprentice themselves to a, then, unnamed alchemist, and after their training, they attempt to resurrect Trisha. The transmutation goes array and Ed loses his left leg, and Al his entire body. Ed then sacrifices his right arm to attach Al’s soul to a suit of armor, and Al carries Ed’s broken bleeding body to Rockbell Automail. Roy Mustang arrives unexpectedly, having received a letter the boys sent to his office, inquiring about their father, Hohenheim. Having seen the attempted “human-transmutation”, Mustang tries to recruit the boys to become state-alchemists and part of the military, but Pinako Rockbell orders him to leave. Ed pays Pinako for automail limbs and decides to become a state-alchemist so he that can gain priviledged access to the State’s Library, and find a way to restore Al’s body (Al in turn promises to restore Ed’s arm and leg). This is when the Set the VCR moment happens…

With their minds made up to restore their bodies, in the ultimate “there’s no turning back” moment, THEY BURN DOWN THEIR HOME and everything in it! Watch the moment unfold right here (4:50 the house starts to burn down): It’s so powerful, that I decided to put the up the French version (you don’t even need to really understand them, plus it’s what youtube had…)

For me, this was the moment that Fullmetal Alchemist became serious… dead serious! And the series itself became a not only a must watch anime, but it also turned out to be one of the deepest stories I have ever seen in animation. The creators of the Fullmetal Alchemist could’ve done the conventional thing and  just used the death of the mother and the resulting accident as a means of the “there’s no turning back” moment, but to take it that one extra step by having them burn down their childhood home was both a risky, yet brilliant move. It set a tone for the series that Ed and Al meant business and at the same time, you could also get a feeling from Ed and Al that they were scared to death and unsure in what was about to happen.

Which brings me to today. Right now, I think I am at one of those times and moments in my life where a certain decision will mean “there’s no turning back.” I wonder if I have enough courage to “burn the house down” …

3 thoughts on “Set the VCR: Let’s burn the house down, there’s no turning back”