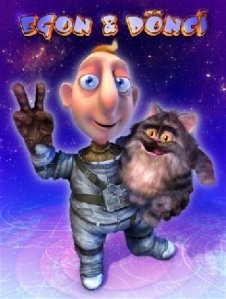 How does one make a movie an experience? When a movie stops being about story, plot, and characters and the  focus is so much about the visuals, the sights and the sounds that we, as an audience, really don’t give a damn about the story.

That’s what Egon & Dönci attempts to do. This quirky Hungarian animated feature (apparently Hungary’s first CG animated movie) has no dialogue whatsoever, and uses gestures and sounds to communicate its characters thoughts and ideas, a technique that is not new by any means to the animation field, but still powerful when done right.

Egon & Dönci is about Egon, a scientist/ explorer  from a distant world and his cat, Dönci. Egon longs to explore the unvierse. He spends his time looking at the stars, and building a spaceship in his barn. One day a satellite from Earth crash lands on his home planet, and Egon concocts an idea to go visit the planet Earth. So Egon & Dönci head into space to explore the universe and visit planet Earth.

The story is not the focal point, in fact it is Egon & Dönci‘s weakest point. I even would say the characters a little weak as well. I was not a big fan of the character designs, and while the character animations were solid, and they told the characters’ moods and emotions well, it was bland compared to the other visuals, namely the environments. The real joy of the film is the space exploration. I have to hand it to the  concept designers and environmental artists. The background and environments were beautiful. Combined with the trippy soundtrack, it really made Egon & Dönci more of an experience than a movie, which was a good thing, because the story, plot, and characters  were non-existent.

Of course, Egon & Dönci might be better enjoyed under the influence of certain drugs.  I wasn’t under any influence when I watched this film for SIFF one Friday morning. However, I still enjoyed the experience.