10 years ago, one of the finest animated movies ever to grace the bigscreen debuted in theaters. The Iron Giant was the breakout movie that put Brad Bird’s (The Incredibles, Ratatouille)  name out there among the elite animation directors. Even though it underperformed in theaters  and was  a box office failure because many felt Warner Bros. didn’t properly market the film, The Iron Giant was praised by critics and is still seen as one of the better examples of storytelling in animation. See the original trailer here:

(Hit the jump to read more about this Bootleg Classic) 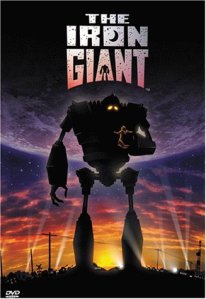 The Iron Giant is based on the 1968 Novel The Iron Man by Ted Hughes about a giant metal man who ravages the countryside until the one day he befriends a small boy. This novel became the inspiration for several pieces of art including a musical album by Pete Townshend and stage production. After this, it was decided that the Iron Man would be adapted to the big screen and a young Brad Bird was given the project of directing the Iron Man.

Bird made the decision to set the story in the cold war 1950’s and writer Tim McCanlies penned the screenplay. Lastly, the name was changed to the Iron Giant to avoid confusion with Marvel’s own Iron Man. The Iron Giant opened to movie goers and animation fans on August 6, 1999. 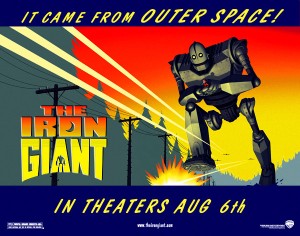 During all of this, Kent Mansley is sent by the government to investigate the mysterious crash landing and the rumors of a giant metal man. Kent and Hogarth play a game of cat a mouse, with Hogarth eventually able to hide the Iron Giant from Kent and the U.S. Army. After Hogarth’s seeming victory over Kent and the Army, an accident occurs when the Iron Giant accidently attacks Hogarth while he is holding a toy gun. Shamed by his actions, the Iron Giant runs off.

Lost in the shuffle of animated movies that came out in 1999 (Tarzan, Toy Story 2, South Park, Fantasia 2000, Pokemon, and others…), The Iron Giant stood out for its engaging story, memorable characters, and it was intelligent and moving, something that many animated features movies lack today.

Brad Bird directed a wonderful satire on the paranoia, weaponry, and lost innocence that engulfed the Cold War era. Funny thing is, with the ongoing war on terror, people dying all over the world due to war, and screams from the drones of people saying that President Obama is leading us toward a path of socialism, don’t you think a satire on paranoia, weaponry, and lost innocence would apply today? Even though there was already a  movie in 2009 about a boy and a giant robot that epitomizes the state of society, I think The Iron Giant is more relevant now in 2009 than it was in 1999.