Welcome to 2010. A new year, and new look for Art of the Cartoon. What better way to start out the new year with a Bootleg Classic. (and yes, hopefully I’ve put behind me most of the cryptic, love-sappy posts =P)

For my return, I give you an animated series that really should’ve never worked. How can you have a show set in the future, and have someone else not named Bruce Wayne as Batman? How can Batman be a teenager? That’s just a recipe for disaster. But for some reason Batman Beyond worked, and brought about the rebirth of The Batman…

Hit the Jump to read more about this Bootleg Classic…

In 2019, an aged Bruce Wayne as Batman is trying to stop a simple kidnapping. During the impending fight, Bruce suffers a heart attack and is forced to draw a gun on someone, something he vowed never to do. Bruce foils the kidnapping, but because of the broken vow, and the years of stress and frustration, he decides to retire the persona of Batman, forever…

Fast-forward 20 years to 2039, Gotham is now a futuristic city. Sixteen year old reformed juvenile delinquent Terry McGinnis has a good heart, he defends a citizen from a Jokerz gang member on a commuter rail in an early scene. However, Terry still has troubles with his Father, whom he is living with, and is still seen as a troublemaker in school.

After once again meeting with a gang of Jokerz, Terry is chased to the edge of Wayne Manor. There he meets up with Bruce Wayne and they both easily defeat the gang of Jokerz. Bruce, now and old man is helped back to the manor by Terry. As Bruce doses off, Terry discovers that Bruce Wayne was once The Batman. Bruce wakes up, and tosses Terry out the manor, for stumbling upon his dark past.

As Terry comes home, he discovers that his father has been murdered by what seems like the same gang of Jokerz. Now, angry and frustrated and living with his estranged mom and brother, Terry learns that his father’s death was actually the result of a corrupt cover-up at his father’s place of work. That place of work Wayne-Powers (merger between Bruce Wayne and Derek Powers).

Terry storms back to Wayne Manor to ask Bruce to don the batman suit one more time to right the corrupt city of Gotham. Bruce refuses, so Terry steals the Batman suit and goes after Derek Powers and those that killed his father. 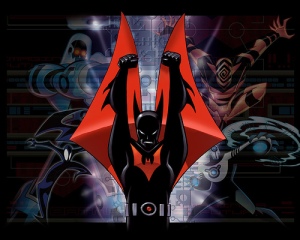 Even though Bruce is against the idea of a new Batman, he sees the good that the kid can do for Gotham. Bruce decides to take Terry under his wing to train and guide him to be the new Batman… and thus The Batman was reborn….

The big thing that really stood out about Batman Beyond is that even though Bruce Wayne is not under the mask of Batman, and that it is set in a futuristic Gotham City, it still retained that feel of a dark and brooding Batman world. In many ways, this series, which was intended to be for younger audiences than Batman: TAS and Superman: TAS, was much darker. The dramatic scenes, the corruption, the murder, the gangs all had a darker tone.

I also give a lot of credit to series creators Bruce Timm and Paul Dini. For Superman: TAS and Batman: TAS, they had hundreds of Batman and Superman stories to chose from and to cover, but for Batman Beyond they had to create a totally new world and they still had the guts to tie it in to the continuity that was established in Batman: TAS and Superman: TAS.

Over the years, there have been many comic book that have attempted failed to do stories about heroes in our future. Remember the Marvel 2099 series? Or remember that god awful Spider-Man Unlimited Animated Series? And there plenty of stories about Batman growing old, or a new Batman that is NOT Bruce Wayne. But the best Batman “rebirth” story is in animated form…

Actually on second thought, the 2nd best Batman “rebirth” story is in animated form. I have to give the first to Frank Miller’s The Dark Knight Returns…

(Who am I kidding, I haven’t put behind me the cryptic, love-sappy posts just yet =P)