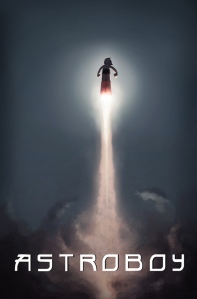 Astro Boy, a character created from the mind of Osamu Tezuka (aka the godfather of anime) back in the 1950s, is one of the most famous manga/ anime characters ever. For those of us who remember watching the reruns of the 1960s anime series back in the 80s or 90s, or for those of us who are fans of old school manga/ anime, Astro Boy, much like Mickey Mouse, and Bugs Bunny, is a timeless character. I, personally, forget about his origin as Dr. Tenma’s attempt to replace his deceased son, but what I DO remember is the fantastic fights he had against other robots and alien invaders. So when I heard that a remake of Astro Boy in glorious CG was going to come out in 2009, I was a little excited. Then I thought about the idea a little more… then I came to a realization that no matter what, Astro Boy would not live up to expectations…

And yeah, I was right. However, that doesn’t mean that Astro Boy isn’t a decent movie. The story does its best with the “what does it be mean to be human” theme crossed with a psuedo “upper class” vs. “lower class” vibe, with bits of other sci-fi cliches strewn in. It’s pretty entertaining, but in the end it just wasn’t Astro Boy.

Its many years in the future, the people of Earth have polluted the planet, and have trashed most of its resources, so what do folks do? They build a utopian floating city (Metro City) in the sky for the few privileged people who can live up there, all the while being waited on hand and foot by a legion of (slave) robots. Enter Dr. Tenma, the head of the ministry of science, and his genius son, Toby. Toby dies in a military/ science experiment gone wrong, and Dr. Tenma attempts to recreate Toby as a robot. Seeing that the recreated Toby is only a reminder of his lost son, Dr. Tenma rejects this robot creation, and robot Toby  finds himself exiled to the garbage heap that is Earth. Finding a society of exiled and lost children in the garbage pile, Toby now called Astro, struggles against a society who force robots to fight each other. Eventually, the military of Metro City track down Astro to obtain the power source that is inside him. Fights with the military then a huge Robot ensue, and magically a happy ending appears.

There are many elements in that story that I found interesting, but none that were done extremely well. We can look back at other animated movies the past few years to see the recycle machine working. Pollution and wasting of Earth’s resources (Hi Wall-E), I am a real boy! (Just like Pinocchio ) Utopian City vs. Lower Slums (Hey that sounds like Metropolis). Still I was entertained by the story.

I was also entertained by the animation. Imagi Studios, which is a Hong Kong based studio that produced the New TMNT back in 2007, does a decent job with the animation. There were some great fight sequences, and nice touching moments. Oh and I appreciated the fact that I didn’t need 3D glasses. I know its supposed to be the next big thing, but sometimes simplicity is the best.

The issue I had, besides Nicholas Cage’s voice acting (I haven’t enjoyed a Nick Cage film in years), was the design choice for Astro Boy. I didn’t think it would be a big deal that they made Astro Boy a little older and more adult, but thinking back it didn’t seem like Astro Boy. Astro is supposed to have more of a child like face to represent his child-like innocence. Because of this, Astro Boy’s larger than life appeal he had in the 1950s manga, and the 1960s anime just wasn’t the same in the 2009 remake.

I did enjoy the film though. There WAS a huge fantastic fight against a giant robot, and that’s what I remember most about Astro Boy back in the day… But I guess there’s more to Astro Boy than that…