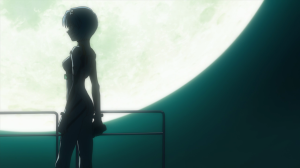 Evangelion 1.11 is a special DVD/ Blu Ray edition of Evangelion 1.0, which in turn was a reboot of the classic anime series Neon Genesis Evangelion. Confused? Well that’s the point. Anime is sometimes known for its convoluted stories, intricate plot twists, and techno-babble dialogue, and the poster child of this generalization was the original 1996 Neon Genesis Evangelion Series. Evangelion 1.11 is the reboot… err… well, its more of a facelift, as it seems the scenes were ripped straight out of the original series. Is it any good? If you like the OG series, you’ll like this film. If you’re looking for a fantastic in-depth, artistic, and stylistic look into the fragile psyche of a teenager abandoned by his father then this is the film for you. If you also like big mech robots fighting huge monsters, then this film is for you. Be warned, you may get lost in its confusing plot and its many allusions to religion. But if you give it a chance, you’re in for a treat.

Evangelion 1.0 is the first of 4 films that attempt to re-tell the story of the 26 episode series that it was inspired by. I personally enjoyed the original series, and much of the same characteristics that made the series so classic are retained in the film. Shinji, our 14 year old main character, is still annoying as ever. Rei, another 14 year old Evangelion pilot, is still as reserved and mysterious as ever, and yes Misato still flaunts her…umm… assets. The real joy of the film and the series was its look into the minds of its 14 year old protagonists as they not only try to save the world from monsters, but also live life whilst going through normal changes that a 14 year old goes through. It’s fitting that the world around them is post-apocalyptic as if I remember when growing up in my teen years, it seemed like the world ended every week.

The only issue with the film, was that it was TOO true to the series. The updated visuals and animation were gorgeous, but something inside me thought, “why don’t I just watch the first 6 episodes of the OG series instead.” And since the film was not episodic like the series, some of the characters, namely Shinji’s friends at school were never really fleshed out. Still though, it’s a fine first film, and it only makes me want to see the 2nd film even more.

Plus the trailer for Evangelion 2.0 seems promising, with a drastic deviation from the OG series hinted at: