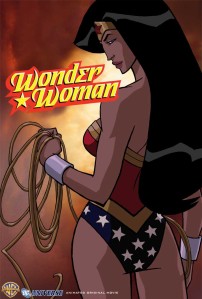 That seems like a lot of story to tell in only 75 minutes, but surprisingly the writing was sharp and the progression of the story was so smooth that I didn’t realize that all that stuff in the previous paragraph was covered (pretty thoroughly I might add).  Finally, after years of Wonder Woman just being part of the Justice League (or Super Friends), there is a Wonder Woman origin story that is told properly. 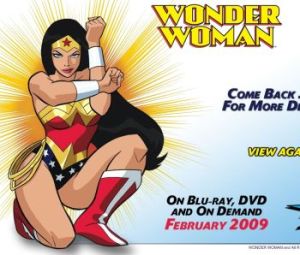 The animation is nice and smooth with subtle blur and gradient filters, reminiscent of many current anime features. The character designs are different enough from the Bruce Timm Justice League style that it sets itself  in a league of its own. The backgrounds are beautiful and the characters are nicely posed.

Speaking of characters, the characters have enough depth for you to care about them. There are great issues and themes there are addressed (I especially love the dialogue on feminism) for adults to enjoy, and there are some great winks at the comic book audience. This is THE definitive Wonder Woman origin story! The voice cast is awesome with big names like Nathan Fillion. Keri Russel, Alfred Molina and Rosario Dawson. They do an outstanding job with the finely crafted dialougue the writers came up with. And the action scenes are epic too! I mean spartan/ fantasy epic.

It isn’t all praise though. Even though Themyscira, the Amazons, and the Greek Gods felt fleshed out and deep, I can’t say the same for the modern world like New York City and Washington DC. Washington DC, specifically, seemed void of people, and didn’t have that “lived in” feel to it. I mean, how do you have an epic battle between Ares, his army of greek monsters and the Amazons right in middle of Washington DC, in front of the White House, the Washington monument, the Vietnam Memorial, the Reflecting Pond, and the Lincoln Memorial and not have people notice? The missle attack from the U.S. towards Themyscira seemed a little contrived. And really!?… After years of distrusting men, all the Amazons cheer when Steve Trevor and Wonder Woman kiss in the middle of the Reflecting Pond… (I’ll admit though,  that made me LOL).

In fact, if they wanted to give Wonder Woman her own animated show, this movie would be the perfect pilot.