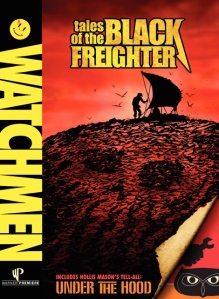 Here’s a quote from my review of the Watchmen live-action movie on March 6:

The side stories, “Under the Hood,” “Tales of the Black Freighter,” “New Frontiersman” articles, psychological reports, etc. that were in the comic that seemed like filler, became more appreciated after I saw the movie. These “fillers” served as pillow moments to help you, the reader, understand not only the characters in this world, but also give you an analogy of the choices many of the “heroes” had to make. Their omission from the film was necessary for time (who wants to see a 4 hour movie?), but came at the expense of the flow and rhythm of the narrative.

The “story within the  story” Tales of the Black Freighter was released on DVD on March 24, but it wasn’t until yesterday after watching an episode of Lost (not one of my favorite episodes of the season last night, but still eventful…) that I was able to watch it. Thanks Brett for bringing the DVD.

Hit the jump to read the rest of the review (btw, the Under the Hood Documentary is also included in the Tales of Black Freighter DVD, however, I will stick to the animation for this review).

The tale of this unnamed captain and his gradual crawl toward madness is fascinating to see unfold in front of your eyes. In an animation world where caterting to the younger audience is usually the norm, it was good to see a deep psychological look  at a person going mad along with all the gruesome blood, gore and guts. And Gerard Butler did a pretty good job of providing not only the voice of the captain, but also the narration.

The animation has a nice sharp feel to it, and even though many of the scenes were homaged from the comic book, it really wasn’t a literal straight shot-for-shot affair. Abandoned are the toned down earth colors from the comic book, and in its place more of a palate of not only dull pastels but also brighter, yet still earth, colors for the animators to work with.  The directors really put some of personality into this piece and I think it helped this animated short stand on its own. Even more impressive was that most the animation was done by hand, and because of this the 2-D looks fairly nice.

However, you can’t take away the context of the story within a story. Tales of the Black Freighter is DECENT as a stand alone story, it won’t win any animation awards though, and won’t come near any of my “best-of” lists. In fact, I remember reading the comic and being shocked at the end that he had gone mad. The story was THAT gradual in the comic book that I didn’t even notice! That effect is lost in this version of Tales…

What I’m actually waiting for is the Director’s cut of Watchmen, with all these animated scenes spliced in. I think then we will see more of the true power of Watchmen. Until then, Tales of the Black Freighter is a good watch, especially if you have that prior Watchmen knowledge, plus its only 20 minutes!